Samuel is teaching me the meaning of the expression "terrible twos." I always thought that referred to a sudden onset of sinful self-will, but that's not true in his case. He's obedient and well-behaved for a child of his age, but because of his age, he is always into something or up to something, and it's often something I wish he weren't into or up to. So the crux of it is that I feel I am constantly after him, "Don't reach onto the counter . . . don't touch the stove . . . don't bite the baby . . . get off the baby . . . don't whine . . . sit at the table to eat . . . don't draw in the book . . . close the refrigerator . . . put your pants back on . . . "
By the end of the day I usually feel completely drained and hopelessly frazzled. He is at such a cute age. He is learning so much and able to do so many things, but I find it difficult to enjoy the process because I feel like I am constantly locked in a struggle with him as he tests and retests the boundaries I've set.
Eventually something has to give, so he usually ends up running around the apartment without any pants or underwear on. At least that makes it super easy for him to use the potty, which he now does without any help or prompting from me. If you enjoyed this, please consider subscribing here. I would be honored to have the privilege of encouraging you on a regular basis!
We have long noticed that Samuel is an organization freak. He knows where everything belongs and can get upset when things are not in their proper place.This trait is a blessing when it comes to getting him to clean up his toys. He has been doing this at our prompting–and enjoying it–since he was at least a year and a half old.
I remember one evening we were putting his toys away as a prelude to getting ready for bed, and some friends were over at our apartment. I was in Samuel's room telling him to bring me his toys from the living room, and one of our friends decided to help him. He collected a variety of small toys, put them in the bucket portion of Samuel's shape sorter toy, gave it to Samuel, and told him to take it to me. Samuel just stood there looking at him, and it took a bit of coaxing to get him to comply. When Samuel finally handed me the bucket, I understood his reluctance. A few of the items inside did not belong in Samuel's room; they were toys that we kept in a drawer in the living room. Samuel knew this and could not understand why he was being told to take them where they did not belong.
Now, at 25 months, when he's finished with a toy, he sometimes puts it away without me saying anything. When he's done with his bath, he usually drains the tub and puts all of his bath toys by himself. He has also become a surprisingly good little helper. One day several months ago I came into the kitchen with a double armload of dirty laundry to put in our front-loading washing machine. Not knowing if he would understand me or not, I said to Samuel, "Can you open the washing machine for Mommy?" He trotted right over and opened it for me! Today when we got home I said, "Oh, Mommy needs to use the potty!" He went straight to the toilet, turned on the light, and opened the door for me!
Given that he likes to put things where they belong and he likes to be helpful, his behavior yesterday was bizarre. While cooking lunch, I was referring to my favorite cookbook, which I had sitting open on the kitchen windowsill. When it was time for me to make dinner, I decided to use another recipe from this cookbook. Since I was pressed for time, it was the perfect meal. It was quick to prepare and used ingredients that I had on hand. There was just one problem: I couldn't find the cookbook. I immediately suspected that Samuel had something to do with its disappearance and started to look in all the places where I thought he might have put it. My search included the bookshelf in his bedroom, but my cookbook was nowhere to be found. I finally gave up and made banush, a Ukrainian version of grits and cheese, for dinner.
Later that evening, after Samuel was in bed, I carried an armload of dirty laundry into the kitchen. As I squatted down in front of the washer and opened the door, what should I see inside but my missing cookbook! If you enjoyed this, please consider subscribing here. I would be honored to have the privilege of encouraging you on a regular basis! 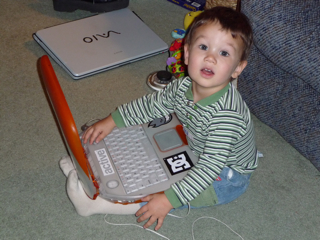 Samuel is a communicator. In the months leading up to his 2nd birthday, he started using sign language extensively to let us know many of his needs and wants. Baby sign language, where parents teach a baby signs so that he can communicate before he is able to talk, is a growing trend right now, but that's not what we were dealing with.
When Samuel started to eat at the table with us, I tried to teach him the sign for "more," just to make our mealtimes peaceful, but he didn't seem to catch on, and I gave up. Then one day about a month later, Samuel finished his food and sat quietly signing "more" until George noticed. We were impressed, and we were even more impressed when he began to use the sign for "all done," which we had taught him inadvertently by putting our hands out to the sides when we would ask him if he was "all done." These two signs greatly simplified our lives, letting us know if Samuel was hungry or full, and we were so happy that he was using them.
But before long we began to notice other signs. There was "telephone," an open hand held over his ear, "chapstick," signed by tracing his lips with his index finger and thumb held together, and "hairbrush," indicated by stroking the top of his head. Every week or so he would create new signs, using them consistently until we figured out what they meant. We learned that tapping his chest meant "bib," knocking on the table meant "egg," and moving the tip of his tongue back and forth between parted lips meant "toothbrush." There were a few signs that we never did figure out, but I suppose that was due to a lack of imagination on our part, rather than a lapse of intelligence on his.
Now, at 25 months of age, he is talking more and more and abandoning the use of signs, but even with speech, he prefers to make up his own language. So bits is pants, and ditz means "music"–and "egg" and "clap" and perhaps "hand," depending on the context. (We think the word ditz originally evolved from the word dance, which is something he loves to do to music. However, he understands the word music when we use it; he simply refuses to use it himself.) Juice means both "juice" (or any liquid, for that matter) and "shoes." I admit that these words sound similar enough that a 2-year-old may be excused for pronouncing them alike. But what about using deedee for "kitty" and "guitar"? In this instance, Samuel's language seems to be tonal, as deedee for "kitty" has a rising then falling intonation, whereas deedee for "guitar" is flat.
As with signing, his strategy with speech is to use his chosen word consistently until we learn what it means. His newest one is nerny, which we're still trying to figure out. When pronounced in a whining tone, it seems to mean "an item of food on my plate that I don't want" (as in the sliver of bell pepper on his slice of pizza the other night), but when said with excitement, I think it means "an item of food, not currently in my possession, that I want" (as in the cucumber that I was slicing for a salad the other day).
Sometimes we get so absorbed in trying to understand his unique language that we even start to use his vocabulary. I was taken aback one day to hear George say, "Samuel, do you want to go juice on the potty?" How is the child ever going to learn how to communicate if we speak like him? Oh, that's right–he has no trouble communicating, and if English proves to be too much trouble for him, he can always go back to signing. Though he relies mostly on speech now, just last week he added a new sign. Whenever he hears a piano playing, he reaches forward with one hand and wiggles his fingers. UPDATE, August 18, 2012: Eventually we figured out that nerny meant a fruit or vegetable. And here's another bizarre word from Samuel's 2-Year-Oldese: for many, many months, dub-duh meant "pizza." If you enjoyed this, please consider subscribing here. I would be honored to have the privilege of encouraging you on a regular basis!

Hi! Im Sharon, mommy to four small boys. Life can get messy around here, but I'm so glad you stopped by to share in the fun!