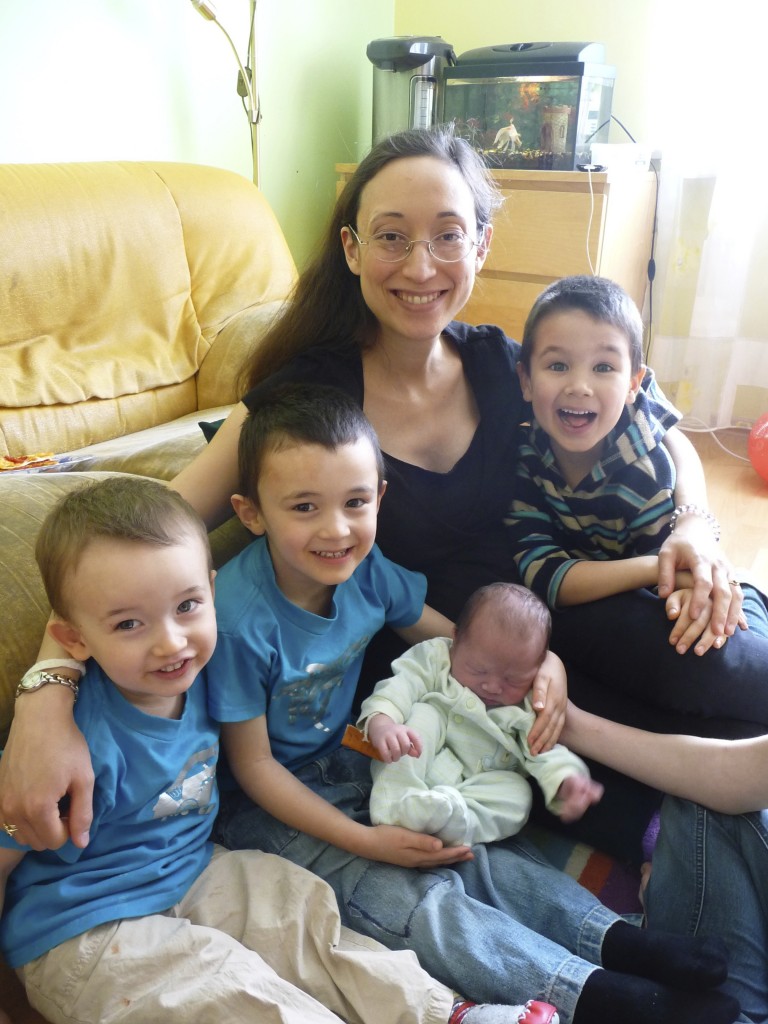 Just as each individual is unique, so every birth story is different. I have four to prove it.

My children have been born in four different cities on two continents under four sets of very different circumstances. Of all my births to date, I was the most nervous before the last one, my fourth baby.

My eldest was born in a government birthing hospital in Kyiv, the capital city of Ukraine. The room where I gave birth was not normally used for deliveries. I think its normal function was as an examination room, but so many women had come to the hospital to give birth the same evening that I did, that there was nowhere else for them to put me. There was a toilet in a closet next door, giving new meaning to the European term “water closet.” The toilet had no seat, just bare porcelain, but it appeared to be clean, and I was thankful that it was a Western-style toilet and not one of the older squatty potties prevalent in Ukraine and a number of other countries. The doctor thoughtfully provided a doughnut-shaped piece of rubberized fabric to serve as a make-shift seat. I wanted my husband and mother-in-law to be present with me, but hospital policy only allowed for one guest. However, the same accomodating doctor used her authority as the head of the department not only to allow both to attend the birth, but to permit my mother-in-law to stay in the hospital with me for the mandatory four days after the birth. She also waived the requirements that I undergo several unpleasant procedures prior to the delivery. I was grateful for all these considerations. However, the delivery experience itself left much to be desired. If fact, that was the last time my caring husband has ever allowed me to set foot in a Ukrainian hospital while in labor. 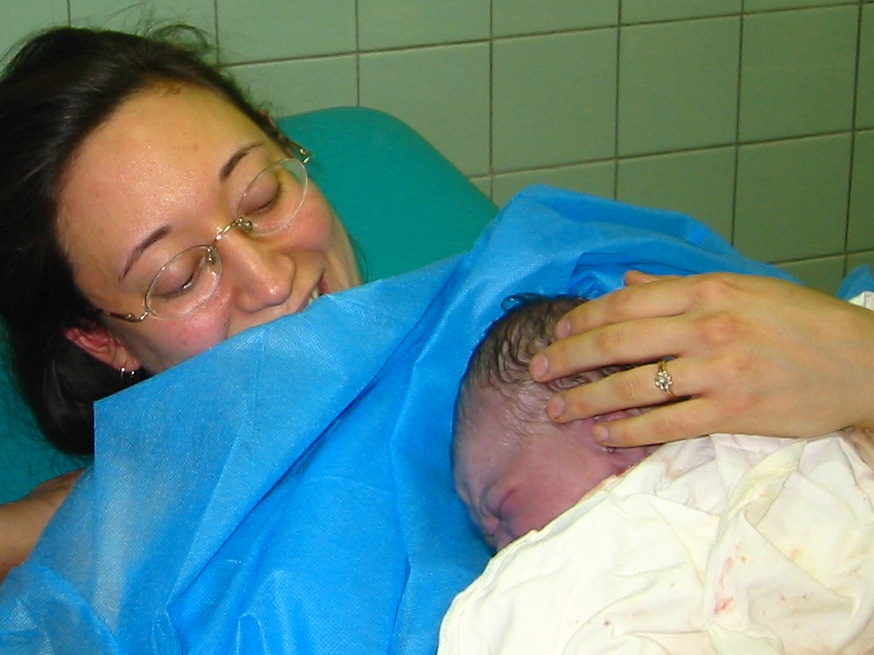 Birth #1: The baby and I were both traumatized, but it was still unspeakably sweet to cradle my firstborn.

My second was born in the United States while I was back for the wedding of my best friend. The hospital where I gave birth was ranked as one of the 100 best hospitals in the country. Their policy was that the mother could have as many people as she wanted present in the delivery room, so my husband, mother-in-law, sister-in-law, and 22-month-old son all attended the birth. The delivery room had a fancy electric bed that could be reconfigured to support the mother in just about any position she wanted, a beautiful private bathroom complete with shower, and a Jacuzzi-style hot tub. I was attended by an extremely competent nurse-midwife and a friendly nurse, and the two of them worked as a team to support me in allowing my body to do what God had designed it to do. I spent most of my time in the hot tub, emerging only after the first gentle push that succeeded in breaking my water and moving the baby’s head down to the opening of the birth canal. I squatted on the floor beside the hot tub, my arms wrapped around my husband’s neck for balance, and two contractions later, our second son was born. 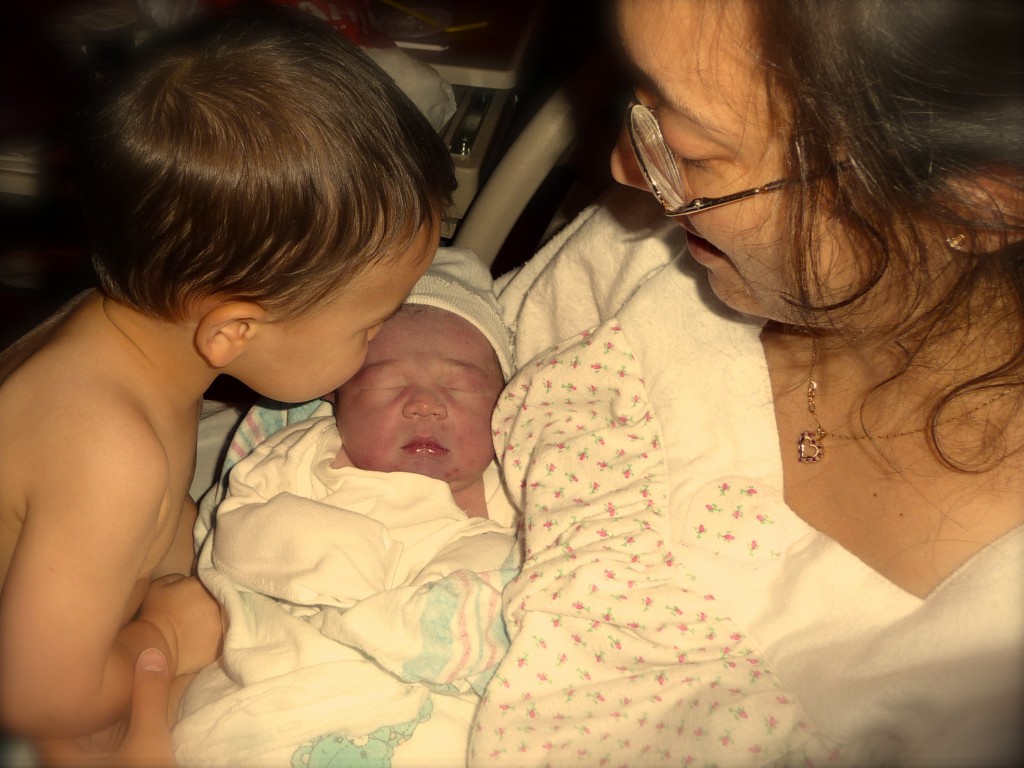 Birth #2: My older son welcomes his baby brother. None of my children have ever shown any jealousy towards a new baby. My theory is that since they have all been present at the births of their younger siblings, they understand that the new little one came from my body and has a legitimate right to my attention. And since I don’t disappear for a few days and then return with a baby, I think they don’t feel threatened by the changes that a newborn brings.

I want to pause here to insert an editorial note. My two hospital births in Ukraine and the United States were almost at opposite ends of the desirable-undesirable spectrum, but I don’t think my experiences necessarily reflect the norm in either country. I know women who have been very pleased with their hospital births in Ukraine and others who have had dismal experiences in the United States. I share what I share here for the sake of giving the background behind our decisions with future births. While it is common knowledge that the United States has some of the best medical care in the world, it is not my intent to discredit Ukrainian healthcare or elevate the U.S. system.

My third was born in the home of a friend in a suburb of Kyiv. After our first birth experience in a Ukrainian hospital, we were determined to avoid a repeat, so we started looking for other options and were able to get in touch with several midwives who attended home births. Unfortunately, they all lived in Kyiv, and by that time, we had moved to a city about 420 km (260 miles) away. The midwife we liked the best told us that, while some midwives would travel to their patients in other parts of the country, she didn’t. If we wanted to use her, we would have to come to her. So, a week before my due date, we packed our station wagon, and our family of four headed to Kyiv to await the arrival of our fifth member. The baby was turned posterior (head down but facing forward, instead of looking at the mother’s spine), which made for a slower, more difficult labor than I was used to. But our friend’s house was equipped with a hot tub, and I was surrounded by caring, supportive people, so the whole experience was peaceful and joyous. I eventually gave birth in the tub, and my husband, two children, mother-in-law, sister-in-law, two friends, and the midwife were present to welcome the new little life.

Birth #3: My 3-year-old son couldn’t wait to meet his baby brother and climbed up on the edge of the tub to reach him
(photo credit: Oksana Dyachenko)

My fourth child was also born in a home; this time, our own. The midwife who delivered our third child agreed to come to us for the birth of our fourth. The plan was for her to come about a week before my due date and stay with us until the baby came. Our back-up plan was for a friend who was in her final year of medical school to attend the birth. We were in touch with our midwife off-and-on throughout the pregnancy, but when we called her about a month before the due date to arrange the details of her arrival, she didn’t answer her phone. This was not uncommon if she was attending a birth, so we tried again the next day . . . and the next . . . and the next. We called; we texted; we waited and prayed.

Finally, after a week or more of trying to get in touch with the midwife, her daughter contacted us. She explained that her mother had made what was supposed to be a quick trip to Russia, but while there, something happened, and she ended up in the hospital. She was still hospitalized, and they didn’t know when she would be released. The earliest possible date she might return to Ukraine was only a few days before my due date!

Despite this news, I still hoped that things would work out according to plan. Our midwife would come back to Ukraine as soon as possible, she would be strong enough to travel to us, I would not go into labor early, and we would have another peaceful, beautiful home birth. I think my husband was being a bit more realistic; he was preparing for an unassisted home birth. I use the word “preparing” loosely, since as far as I could tell, the full extent of his preparation was to admit that this outcome was likely and decide that he was okay with it.

I, on the other hand, was not okay with it.

I guess that technically we were never really facing an unassisted home birth, because our medical-student friend was standing by in the event that our midwife couldn’t make it, but although the former had spent several summers assisting an ob/gyn and had even delivered three babies under supervision, somehow that knowledge gave me little consolation. It can take me a while to adjust to a sudden change of plans, and I was having enormous difficulty embracing this unexpected development. I knew that the Bible tells us, “Be anxious for nothing, but in everything by prayer and supplication with thanksgiving make your requests known unto God,” but though I was trying my honest best to follow this injunction, I still was not experiencing the promised “peace that passes all understanding” which was supposed to be the result.

Instead I was consumed with anxiety.

I knew that God was in control of the situation, that nothing would happen apart from His will, and that I could trust Him to arrange things for my good. I remembered our previous birth experiences and how He had guided us and protected us, but none of this knowledge seemed to penetrate my heart. I wasn’t comfortable with the idea of giving birth without our midwife, but as much as that option frightened me, the idea of giving birth in a Ukrainian hospital frightened me even more. Neither my husband nor I considered the latter to be an option.

As the days passed and we still had no word from our midwife, we began to gather additional supplies for the birth, things that she had brought with her when she attended the birth of our third child: sterile gloves, a trumpet-shaped instrument for listening to the baby’s heartbeat, clamps for the umbilical cord, and injections to stop hemorrhaging.

Then, five days before my due date, I started to have contractions . . .

You can read Part 2 here.

If you enjoyed this, please consider subscribing here.
I would be honored to have the privilege of encouraging you on a regular basis!